Magnesite is the highest magnesium-containing mineral in nature and the main source of magnesium metal raw materials. Also known as magnesium hydroxide. named in English by the surname of American mineralist A. Bruce (ArchibaldBruce). Brucite is composed of magnesia-rich silicates such as brucite (MgO) or serpentine and magnesium-rich carbonate minerals altered by hydrothermal solution. Often associated with serpentine, magnesite and other associated vein-like output, also found in metamorphic dolomite and metamorphic limestone. Magnesite ore is mainly brucite, often accompanied by serpentine, calcite, dolomite, magnesite, magnesite, magnesium silicate minerals, magnesite, diopside, talc.  is often used as a refractory material for magnesium and a secondary source for the extraction of magnesium.

Present situation of development and application of brucite powder:

the water content of brucite is particularly high, about 31%. The differential thermal analysis of brucite shows that its thermal separation water temperature is between 420~520℃, which is close to the combustion temperature of general articles, so it can be used as fire proof coating and flame retardant. Japanese scholars have developed a coating, which is made of hard cement, slightly treated brucite and some other substances mixed in an appropriate proportion. This kind of coating has the characteristics of light weight, good decoration, strong weathering resistance, good fire resistance and no peeling after fire. can be used for surface coating of ships, high-grade houses, etc. 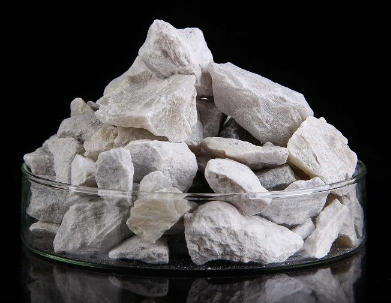 brucite has the characteristics of high whiteness, good peeling property, strong adhesion, and basically no water absorption. the former soviet union used it together with calcite as a papermaking filler, so that the papermaking was changed from acid method to alkali method, and the pollution of slurry water was reduced. In the paper industry, brucite can absorb and recycle waste slurry water in the process of producing magnesium sulfate pulp instead of lime, which greatly reduces the pollution of waste slurry water to the environment. Because brucite does not absorb water in the air, it can also be used as a filler for moisture-proof wrapping paper.

In brucite, the content of magnesium oxide is high, and brucite can be directly calcined to produce magnesium oxide, and the process is simple, the cost is low, and it is easy to control. The refractory grade magnesium oxide can be obtained by using brucite, and brucite has developed greatly as a refractory material abroad. brucite and dolomite are used abroad to calcined magnesium and calcium oxide at high temperature, then ground fine, then mixed with organic binder, pressed into a mold, after secondary calcination to produce refractory brick products, using brucite can also make high grade magnesia. Magnesium as a refractory material has developed a lot abroad, Japan needs to import about 40~50,000 t of brucite each year to meet  demand for industrial development.

The advantages and disadvantages of magnesium smelting with water magnesite, magnesite and serpentine are compared in China. The feasibility and advantages of using Pijiang method and semi-continuous silicon heating method are discussed. According to the news, some people with Liaodong brucite trial production sample, and has made products.